What’s the Difference Between Major Brands of Mouthwash? 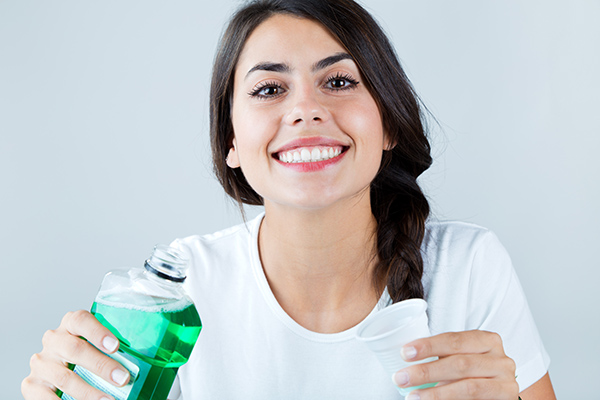 The American Dental Association provides its Seal of Acceptance to tested and trusted products that prove to offer a benefit to your dental health. Let’s look at two major brands and the differences between their ADA-approved products:

The primary use for Crest’s anticavity fluoride rinse is to:

The primary uses for ACT anticavity fluoride rinse is to:

To achieve this, ACT’s active ingredient is .05% “sodium fluoride.” Not unlike Crest, and any other mouth rinse on the market, it also includes its own unique blend of inactive ingredients for color and flavor.

Did you notice the key similarity? They both use the same active ingredient. In fact, almost any anticavity mouthwash on the market will use a similar compound as fluoride is well-known for its ability to fight decay.

So, Does Brand Really Matter?

Not really. While every brand has its own variation, the formulas for many mouthwashes and mouth rinses use the same ingredients to accomplish their goals. The difference between the brands often comes down to taste and whether they include alcohol.

The key factor behind choosing the right mouthwash is finding one that has active ingredients that help your situation. There are three major types of over-the-counter mouthwash, each designed for a different purpose:

As we mentioned, this type of mouthwash contains sodium fluoride and is used to strengthen teeth and protect against decay. Fluoride is also present in tap water and it’s typically included in most toothpastes as well. If you or your child frequently brushes but still has problems with cavities, it’s possible that a fluoride mouthwash can help.

When you think of mouthwash, you probably think of fresh breath. In some ways, cosmetic mouthwash is exactly that. It doesn’t provide any benefit in the form of fighting plaque, cavities or gingivitis… but it does leave your breath fresh. What’s important to remember is that all these cosmetic mouthwashes offer is a mask for bad breath. The bacteria remain in your mouth, which makes cosmetic mouthwash something to generally avoid.

Many brands of mouthwash have an anti-septic version, which uses the active ingredient chlorhexidine gluconate. It impacts the growth of bacteria, benefitting you in two ways: it helps people suffering from tooth infections, and it also prevents bad breath. Anti-septic mouthwash helps for those suffering from oral infections as well. You need to be careful when using them, however, as the chlorhexidine can cause tooth discoloration when overused.

Should I Avoid Mouthwash with Alcohol?

There is a popular myth that alcohol in mouthwash helps its ability to fight bacteria. Alcohol is included in mouthwashes to act as a carrier agent for the active ingredients, to aid their ability to penetrate plaque. It’s common for mouthwash to have considerable amounts of alcohol, up to nearly 30%.

Current research hasn’t proven that alcohol mouthwashes cause oral cancer, but that’s not to say they can’t be harmful. One proven side-effect of alcohol-based mouthwash is that it causes dry mouth, which can promote bacteria growth and bad breath. If you have dry mouth symptoms and frequently use an alcohol-based mouthwash, try switching to one of the many ADA-approved formulas that don’t.

Mouthwash Is Not an Alternative to Brushing & Flossing

While mouthwash can be a beneficial part of your daily dental care routine, it will never be able to compete with brushing your teeth and flossing. Despite some brands of mouthwash saying that they kill 99.9% of bacteria, plaque sticks to your teeth in a way that a rinse can’t remove. That’s why brushing is critical.

When it comes to flossing, there are some studies that show its efficacy is similar to flossing for controlling interproximal gingivitis. However, some foods that are sinewy or chewy can still trap large pieces between your teeth. Over time, these promote decay and can worsen your breath. Only flossing will be able to dislodge them.

Your best bet is to combine brushing with flossing and mouthwash, as long as you don’t begin to experience any side-effects like dry mouth.

If you want to keep your teeth and gums healthy, the professionals at Walbridge Dental provide complete family dental care to families in the Millbury community. Contact us online to set up an appointment now or call us at 419-836-1033.