Common Bleeding Gum Causes & How You Can Prevent Them 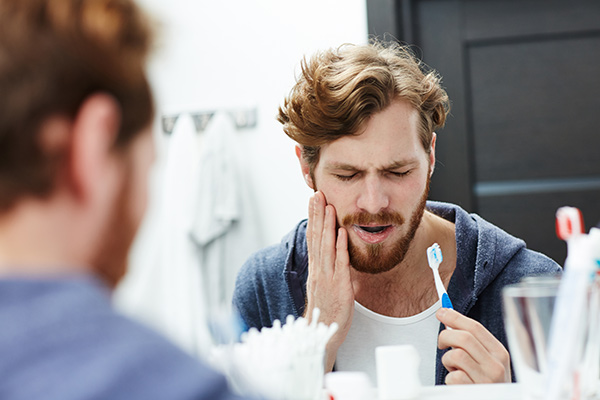 It’s important to take daily care of your teeth and gums. Without the right habits for dental care, your mouth can experience a variety of pains and problems. One of the most common issues we see are patients with bleeding gums. Even the most common bleeding gum causes are reasons for concern – but they’re often just one symptom of a larger problem.

The Most Common Bleeding Gum Causes

The most likely cause of bleeding gums is gum disease, also known as gingivitis. It’s estimated that around half of American adults have some degree of gum disease. When your mouth begins to fight against bacteria in your mouth, you’ll experience inflammation and sensitivity in your gums.

Bleeding gums from gingivitis are most commonly identified during brushing – when even gentle brushing leads to bleeding. In many cases, you won’t necessarily feel pain, though your gums may be more sensitive to brushing than usual.

The good news is that early gingivitis is easily reversed with basic dental care! Don’t let the bleeding or sensitive discourage you from brushing; it’s important to continue removing plaque and bacteria from your mouth to prevent gingivitis from progressing.

If gum disease isn’t treated early on, it can develop into a more advanced stage known as periodontitis. When you have periodontitis, your gums are infected, which damages the soft tissue and leads to many other health risks.

Unlike gum disease, which can often be relatively benign in its earliest stage, periodontitis is a serious condition. Not only will periodontitis cause your gums to bleed very easily, it can quickly cause you to lose your teeth or even some of the bone structure in your mouth.

Typically, when you brush your teeth and unexpectedly identify that they’re bleeding, it’s a sign of gum disease. However, even without gum disease, brushing can cause some bleeding to occur. There are typically two reasons for this:

Surprisingly, pregnancy can be a very likely source of bleeding gums due to gingivitis. The increase in hormones that an expecting mother experiences dramatically increases the sensitivity of their gums. This makes them far more likely to develop gum disease, leading to bleeding gums.

While half of Americans have some degree of gum disease, nearly 70 percent of pregnant women will develop at least a mild case of gum disease! Read our article about pregnancy gingivitis to learn more!

One side-effect of chemotherapy is low platelet count. Because these platelet cells help blood to clot, it increases bleeding in the mouth. If you’re undergoing chemotherapy for any reason, it’s important to pay attention to your oral health too! Infection in the mouth can happen more rapidly during chemotherapy, and your body’s reaction to it might be more severe.

Don’t forget to keep your dentist informed about other medical events in your life, like going through chemotherapy, so they can provider better care for your dental health.

Occasionally, you may notice small white sores in your mouth along your gums that are very sensitive to touch. These small sores, known as canker sores, can be caused by anything from stress to gingivitis. If you irritate your canker sores by brushing them, they can easily bleed with just a small amount of force.

As painful as it may be, it’s important not to skip brushing or using mouth rinse with your canker sores! Your mouth may be more susceptible to infection or disease when its compromised with sores. Just try to avoid brushing the sores directly – they will heal much faster when you don’t irritate them.

As gingivitis is easily reversed in its early stages, bleeding gums can sometimes be seen as a helpful early warning sign that your oral health is at risk. Unfortunately for smokers, this hard-to-miss signal that you need to take better care of your gums can be diminished due to the effects of smoking on your body.

Smoking has a side-effect of reducing the overall blood flow to your gums. Patients that smoke and suffer from gum disease may not experience visible bleeding from their gums. While this may sound like a benefit, it means that smokers sometimes develop advanced gum disease before they even realize something is wrong.

Severe cases of periodontal disease can dramatically impact your health – and are much more difficult to manage. In some cases, a smoker with gum disease may not be aware of their condition until they’re already beginning to lose teeth, gums or even part of their bone mass.

Why You Should Pay Attention to Bleeding Gums

No matter the cause, bleeding gums are a sign that something is wrong with your mouth. If the cause for your bleeding gums is gingivitis, you can seek out immediate treatment to reverse it. The earlier you catch developing periodontal disease, the easier it is to reverse.

Remember that any type of gum disease or inflammation in your mouth can have an impact on your body’s overall health. Don’t ignore bleeding gums or other warning signs with your oral health – treat them like you would any other illness or disease.

Switch to a Softer Toothbrush

Use a toothbrush with soft bristles that won’t irritate your gums. Special brushes labeled “soft bristles” or those designed not to damage dentures, will be gentler than standard brushes. It’s important to find a good balance between a toothbrush that won’t cause severe bleeding but is still firm enough to adequately clear plaque and bacteria from your mouth.

The pain from sensitive gums and the discomfort of seeing blood may discourage you from brushing, but you must keep brushing twice per day! If your gums are sensitive or bleeding, you likely have gingivitis – which means that skipping your normal dental care routine will only make things worse.

If you continue brushing and take care of your gums, the bleeding should stop in days or weeks depending on the severity of your gum disease.

Many patients think flossing isn’t that important. Particles of food and bacteria can hide in hard-to-reach places in your mouth that a brush simply can’t access. If you don’t floss, these spots allow bacteria to thrive and cause decay or gum disease in places that even your dentist can’t immediately see.

Flossing should be part of your every day routine. Brushing simply isn’t enough to prevent the plaque that will lead to gum disease and bleeding gums.

This applies to any type of tobacco use, including cigarettes, pipes or chewing tobacco. Tobacco-use is linked to dozens of health conditions that can put you at risk throughout your life. Avoid smoking, and if you’re already a smoker, try to find ways to quit.

Your Dentist Can Help with Gum Disease & Bleeding

The best defense you have against any bleed gum causes is your dentist. They can identify the source of your bleeding gums, make recommendations on how to treat or reverse gum disease and even direct you to a specialist if needed.

If you continue to visit the dentist at least every six months for your regular check-ups, your chances of developing severe gum disease drop significantly. Prevention is far better than treatment – so make sure to schedule your dental appointment if it’s been a few months since your last visit!

Are your gums bleeding, experiencing sensitivity or pain? We can help! The professionals at Walbridge Dental provide complete family dental care to families in the Millbury community. Contact us online to set up an appointment now or call us at 419-836-1033.